Subtle differences in polymer formulation are common as several additive packages are introduced into polymers to vary the chemical and physical properties of the product. There are instances where the product suddenly becomes more brittle, easily deformed or fail in routine use.  Characterization of these vital products is essential for development, manufacture, processing, usage, and failure analysis. The qualitative and quantitative analysis of these additive packages often requires sample pretreatment, such as solvent extraction, to isolate or concentrate the additives of interest. These techniques are cumbersome, time-consuming, and suffer from analyst-to-analyst variability while producing data of limited value.

Thermal Desorption-GC/MS (TD-GC/MS) does not require any solvent extraction or sample pretreatment. This technique uses the multi-mode Pyrolyzer with a vertical micro-furnace design that allows programmable and multiple thermal desorption analysis on a single sample. To determine the thermal profile (i.e., detector response as a function of sample temperature), Evolved Gas Analysis (EGA) is performed first on a sample. To perform EGA, a short, deactivated tube (2.5m, 0.15mm id.) is used to connect the injection port to the MS detector. The sample is dropped into the furnace at a relatively low temperature (40-100˚C). The furnace is then programmed to a much higher temperature (600-800˚C). Compounds “evolve” from the sample as the temperature increases. A plot of detector response versus furnace temperature is obtained.

Extracted ion chromatograms (EIC) are used to identify the thermal zone over which specific compounds of interest evolve from the sample. Now, these optimum TD temperatures can be used in subsequent TD-GC/MS experiments to introduce the key components of interest while minimizing the introduction of the matrix.

Experimental: ASTM D7823-16 is based on the thermal desorption (thermal “extraction”) of the phthalates from a polymeric substrate. The method calls explicitly for the dissolution of the polymer in a suitable solvent such as THF; however, subsequent studies have shown that meaningful data can also be obtained when the polymer is analyzed directly. The shortened version of the Frontier “method map” in conjunction with ASTM for analysis of phthalates is described in this report. You can request the complete technical paper by simply connecting with us.

From the EGA thermograms, the thermal desorption for the phthalates of interest was determined (100-320ºC). The cup is dropped into the Pyrolyzer furnace, which is at 100°C. The temperature increases at 20°C/min until it reaches 320°C. The initial column temperature is 80°C, which is low enough to facilitate the condensation of the desorbed vapors into a narrow band at the head of the column. The total ion chromatogram (TIC) and the extracted ion chromatograms (EIC) for some of the regulated phthalates are shown in Figure 2. 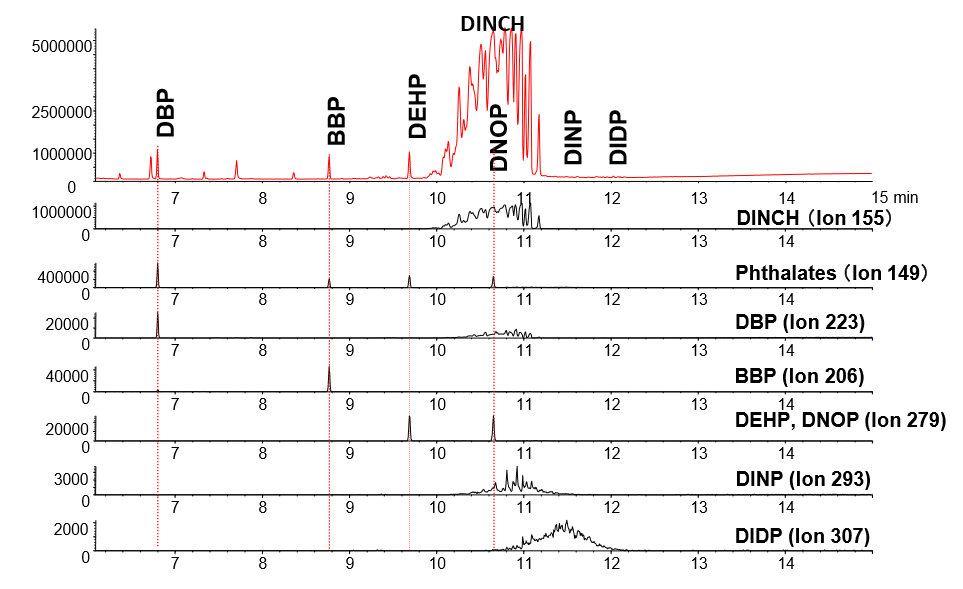 Figure 3. TD-GC/MS analysis of a PVC-DINCH polymer spiked with six regulated phthalates. The phthalates are identified based on their relative retention time and the presence of the phthalate specific quant ion. The concentration of each phthalate was also calculated using standard addition calibration. The complete technical paper demonstrates the quantitative analysis.

To request the complete technical report including the quantitative analysis, connect with us.

Conclusion: Thermal desorption-GC/MS technique eliminates conventional sample prep regimes; the sample is heated to the point that the additives desorb from the sample (thermal extraction). It is fast, uses minimal or no solvent, and eliminates the need for expensive glassware. TD-GC/MS is a “volatiles only” analysis; high boiling sample constituents remain in the sample cup which eliminates system contamination, increases system stability and reduces run-to-run analysis time.

The Multi-Mode Pyrolyzer provides the users with a clear picture of the sample’s composition by identifying the thermal zones and the compounds in each zone. Using the EGA thermogram, one can simply determine the suitable temperature program and program the Pyrolyzer’s furnace appropriately.

Using this technique, solid samples can be analyzed. There is no solvent required when using Pyrolysis-thermal desorption GC/MS as opposed to traditional GC/MS techniques. In other words, the solid and liquid samples can be injected (using an inert sample cup) into the Pyrolyzer without any solvent and sample pretreatment. This advantage, as well as rapid screening capability, is one of the primary reasons many laboratories integrate the multi-mode Frontier Pyrolyzer into both their day-to-day QC and analytical research protocols.