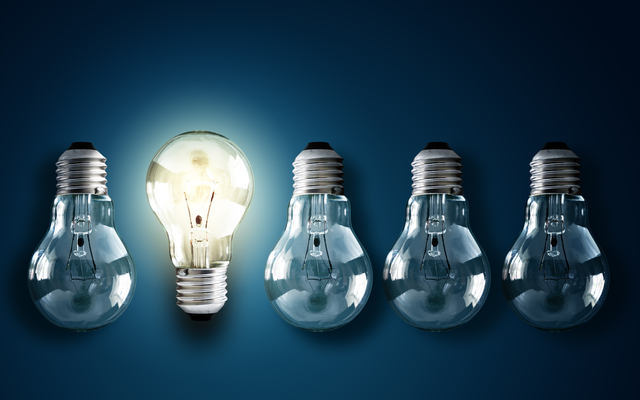 Today, analytical pyrolysis encompasses much more than simple flash pyrolysis of polymeric materials. Virtually any material (liquid or solid) can be characterized using an array of techniques, which are part of a modern day, Multi-Mode Pyrolysis System. Using the Multi-Mode Pyrolyzer, volatiles, additives, oligomers, as well as polymeric, and heavier components can be analyzed. This technique is also broadening the range of samples that can be analyzed using Gas Chromatography-Mass Spectrometry as any solid sample can be introduced into the Multi-Mode pyrolyzer without any need for solvent, solvent extractions, or pretreatments prior to the analysis.

Another advancement in Pyrolysis-GC/MS technique is the improvements and simplifications of data interpretation using the F-Search engine libraries. The F-search engine consists of four unique libraries:  Evolved Gas Analysis (rapid screening of evolved gases), additives, pyrolyzates, and polymers. Also, custom user libraries can be created along with the four unique libraries for performing failure, contamination, and comparative analyses.

To illustrate the capabilities of this technique in analyzing a wide range of components, the shorter version of an application note is described here.

When working with complex challenging samples, such as an eyeliner pencil, the first step is to characterize the sample using evolved gas analysis (EGA-MS). Analysis of the EGA thermogram provides information about the thermal complexity of the sample, the nature of the polymer(s) and the presence or absence of specific compounds of interest. EGA will help the analyst select the next step in the process.

Experimental: The eyeliner is placed directly into the sample cup and analyzed directly; there is no sample prep. needed. 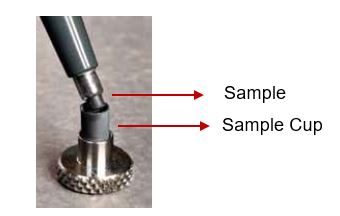 Using a traditional Pyrolyzer system, the flash pyrolysis pyrogram could be obtained which is the combination of all additives, oligomers, and polymeric fragmentations. As the results, the data interpretation and distinguishing individual compounds from polymeric components is extremely difficult. However, using a Multi-Mode Pyrolyzer GC/MS system, the obtained EGA thermogram can be thermally sliced into different thermal zones. Each GCMS runs will produce separate chromatograms corresponding to each thermal zone that allows the scientist to easily identify the composition in each zones of the EGA.

The EGA thermogram and the thermally sliced temperature zones (called Heart-Cutting EGA-MS) can be seen below. As shown, the additives and lighter components are thermally extracted from the polymer mixtures; so no solvent extraction and sample preparation were needed using this technique.

EGA-MS requires a direct connection between the split/splitless injection port and the MS detector. This is done using a deactivated 0.15mm i.d. capillary tube (EGA tube). As the sample is heated the evolved gases flow to the detector. The x-axis represents the temperature (°C) /elution time and the y-axis is the intensity.

Heart-Cut EGA-GC/MS analysis of zones A to E of EGA thermogram of the eyeliner vapors evolving from each EGA thermal zone are selectively introduced into the GC separation column and analyzed by GC/MS. Using the selective sampler and the MicroJet Cryo-Trap, up to eight thermal zones can be isolated and analyzed. Shown below are the chromatograms obtained when each of the EGA thermal zones (A – E) is analyzed sequentially. The entire method can be automated using the auto-shot sampler. 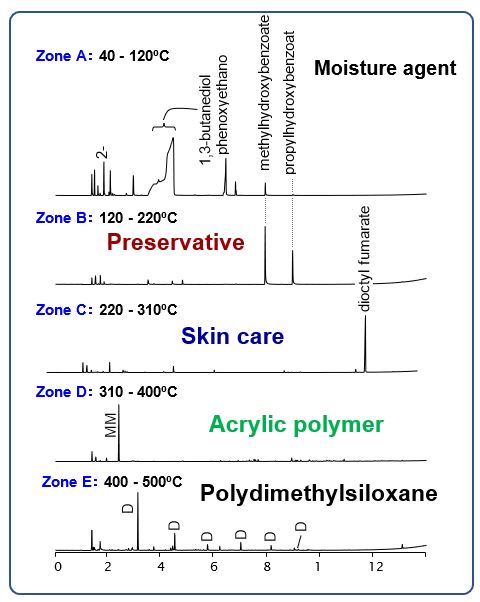 Today, more analytical laboratories in many industries are integrating Frontier’s latest technology into their mainstream analytical protocols due to the advantages and immediate quality improvements this technique provides. The Multi-Mode Pyrolyzer provides the users with a clear picture of the sample’ composition by identifying the thermal zones and the compounds in each zone. Using the obtained EGA thermogram, one can simply program Pyrolyzer’s furnace with the appropriate temperature and method, such as Heart-Cutting. This technique allows multiple analysis on a single sample while there is no need for any solvent and sample pretreatment as the sample is simply introduced into the GCMS by the Frontier Multi-Mode Pyrolyzer.

To learn more about EGA & Heart-Cutting EGA-MS techniques and system configuration, connect with us.