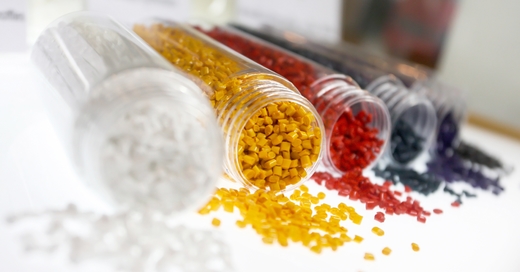 Phthalates are widely used as plasticizers by industry to enhance product durability. It has been determined that many of the phthalates have a detrimental effect on human health. Six phthalates (shown in Table 1 below) are now regulated by the EU (Directive 2005/84/EC) and the US (Consumer Product Safety Improvement Act, Section 108). The analysis of these phthalates is becoming commonplace and there is a near universal interest in a simple and accurate method for analyzing phthalates in polyvinyl chloride (PVC).

All the past methodologies for the determination of these phthalates are based on solvent extraction, filtration and concentration. These traditional techniques are cumbersome, time consuming, and suffer from analyst-to-analyst variability while producing data of limited value. In addition, PVC often contains many other plasticizers (several tens of percent) which co-elute with the phthalates of interest. This so-called matrix interference leads to either false positives or false negatives and makes the accurate determination of the co-eluting phthalates impossible.

In response to these analytical challenges and in conjunction with the ASTM, Frontier Lab developed a technique using the Multi-Shot Pyrolyzer coupled with a GCMS system for analyzing phthalates in PVC. This technique provides the analyst with a “method map” for identifying phthalates both qualitatively and quantitatively. First Evolved Gas Analysis (EGA)-MS is used to determine the optimal thermal zone in which the target compounds evolve as the sample is heated. Then Thermal Desorption (TD)-GC/MS which is a simple, one-step technique is used for the analysis.

How the analysis was done:

A sample consisted of small pieces of a PVC toy was taken from ten different locations using a Harris Micro puncher (Frontier Lab Tool Kit). They were dissolved in 1 mL of THF (50 mg/mL). Six different phthalates were added to the THF solution. 10µL of the THF spiked solution was added to a sample cup; the solvent was evaporated leaving a thin film of the sample on the surface of the cup (ca. 0.5mg).

Figure below shows the obtained EGA thermogram and Extracted Ion Chromatograms (EICs) that are used to determine the thermal zone for each of the phthalates and the hydrogen chloride that is generated as PVC is heated. Using average mass spectrum, the first peak is identified as DINCH (1,2 cyclohexane dicarboxylic acid di-isononyl ester). It is critical to ensure that the ions used to monitor the six phthalates can be differentiated from ions produced by non-target additives, like DINCH. The EICs clearly show that the temperature range in which all six phthalates are thermally desorbed is 100 to 350ºC. 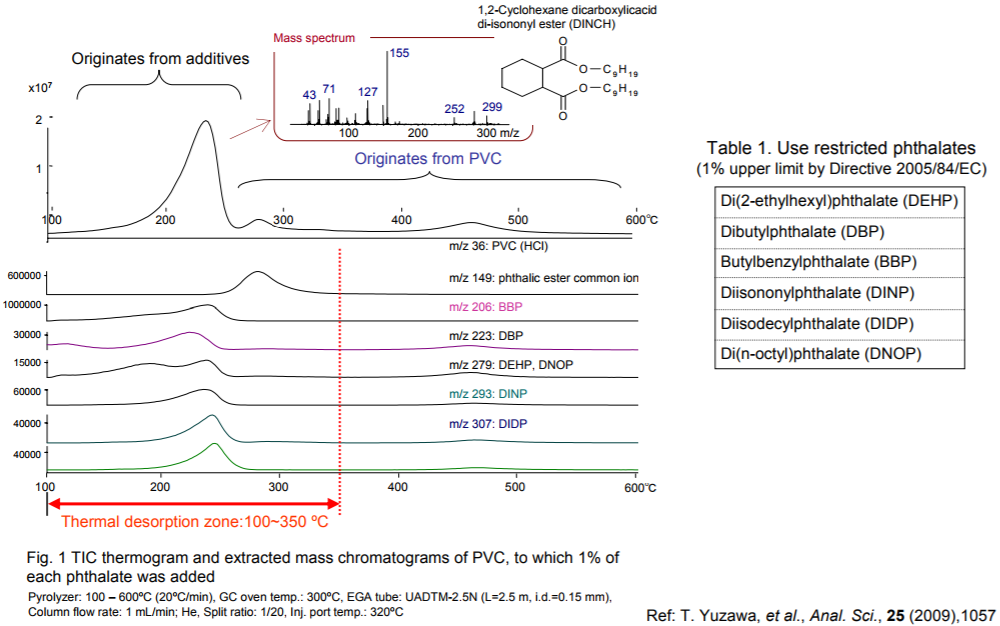 In the next step a TD-GC/MS system that consists of a Multi-Shot Pyrolyzer interfaced directly to the split/splitless injection port of a GC/MS, was used. The samples were milled to 45 mesh, and thin films were prepared by solvent casting (adding a liquid to the sample cup and then evaporating the solvent). From the EGA thermograms, the thermal desorption for the phthalates of interest was determined (100-350ºC). Using EIC peak area for the quantitation, the concentration of the phthalates in the samples were calculated using a standard addition calibration methodology.

Figure below shows a TIC chromatogram obtained by TD-GC/MS. DINCH, a non-phthalate plasticizer, was identified as the major component in the 17-18-minute retention window. Compounds having fragment ions m/z 149, 223, 273 were found at 11 and 16 min. Based on the mass spectra and retention times, these peaks are identified as DBP and DEHP. The concentration of the two phthalates is ca. 50 and ca. 300 ppm, respectively. The reproducibility (n=5) of the DEHP concentration is 5% RSD for the powder, and 1% for the thin film. The RSD difference between the solid and thin film can be attributed to the lack of homogeneity of the solid sample. 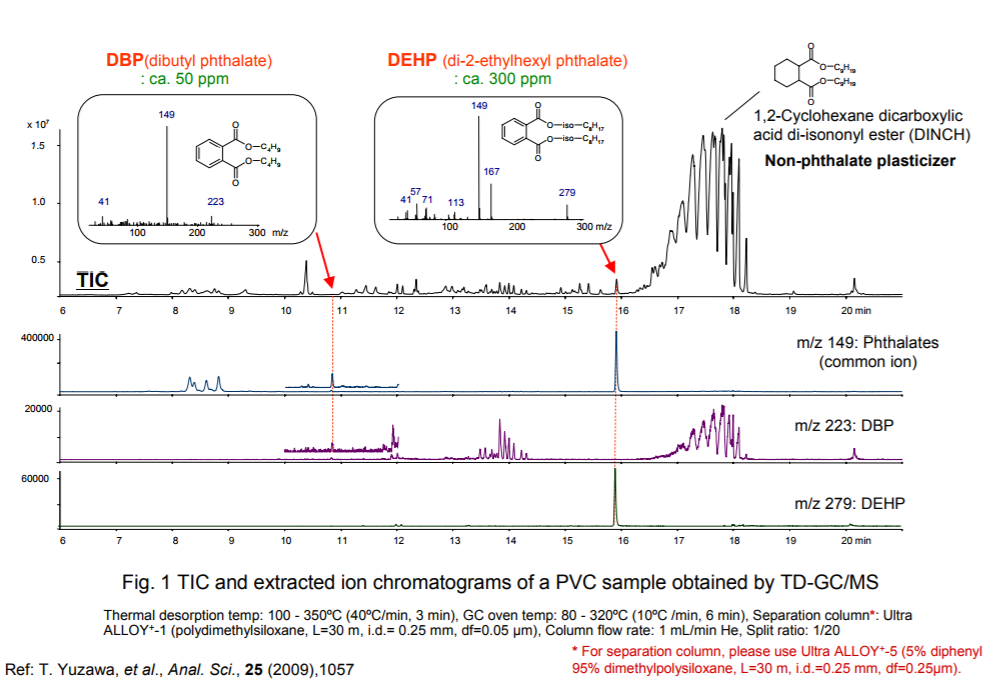 This simple example clearly shows that the Frontier Multi-Shot Pyrolyzer is a viable technique in analyzing phthalates in plastic industry. Today, most laboratories are integrating the Frontier Multi-Shot Pyrolyzer into their mainstream analytical protocols due to the advantages and immediate quality improvements this technique provides. Frontier Multi-Shot Pyrolyzer Guarantees reproducibility and accuracy where every facet of the system is designed to ensure reliability and data quality. All surfaces in the sample path are quartz deactivated using a proprietary process, there is NO transfer line and NO cross contamination! The system also increases laboratory productivity as sample preparation takes much less than traditional techniques that require solvent extraction.