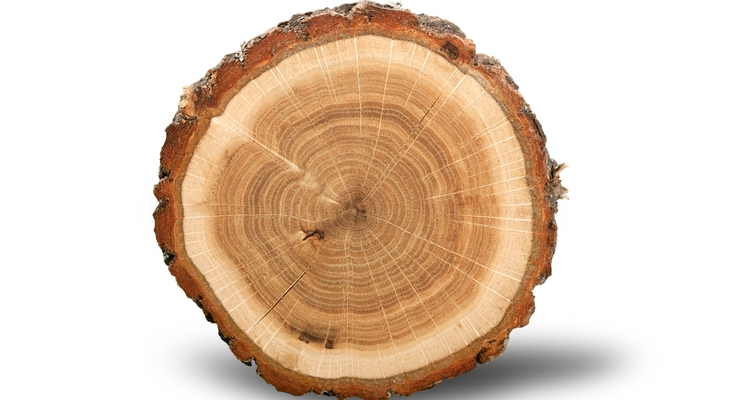 Lignin is a natural cross-linked polymer consisting of various phenyl propane units. The lignin in hardwoods such as Eucalyptus consists of syringyl propane units (S) and guaiacyl propane units (G). It is known that the lignin content and its composition, particularly S/G ratio, often vary depending on origins and growth conditions of the trees.

In this technical brief, an alkali lignin sample is analyzed using the multi-mode micro- furnace pyrolyzer (EGA/PY-3030D) interfaced directly to a GCMS. The sample in the form of brown powder is analyzed “as is”; no solvent extraction or sample pretreatment prior to the analysis. The sample is weighed and placed into an inert sample cup (Eco-cup).

A full range Evolved Gas Analysis (EGA) was first performed.  EGA-MS, which produces a thermogram, provides a “picture” of the sample’s complexity and its thermal profile.   “Features” seen in the thermogram guide the analyst for the next steps of the “method map”.   Thermal zones of interest in the EGA thermogram are then analyzed one at a time using one of the modes of the pyrolyzer’s operation called heart-cutting.  This technique slices a thermal zone out of the sample and separates the components chromatographically with detection by MS. The generated pyrolyzates are continuously and directly transferred on-column. If the thermal zones contain volatile compounds, a MicroJet Cryo-trap (MJT) can also be used to cryo-focus the components at the head of the analytical column before starting the chromatographic run.

Experimental: The EGA was first performed by programming the furnace from 100 to 800 oC@20oC/min. Compounds evolved continuously, and EGA thermogram was obtained (shown in Figure 1).

EGA data indicates this lignin sample pyrolyzed by 500ºC and there are several temperature ranges to elute the pyrolyzates. This EGA data guides the analyst to determine the next step of the analysis. In this case, The temperature range for subsequent Heart-Cut (HC) analysis was determined.

Figure 2 is the Heart-cut chromatograms of each temperature zone. The peak and label identifications are shown in Table 1.

In summary, the multi-mode pyrolyzer is based on a vertical micro-furnace design and allows multiple modes of operations. Full range EGA, thermal desorption, heart-cut, flash pyrolysis, and double-hot analysis can be performed using the multi-functional furnace.

With a direct connection to the GC injection port (no transfer line or switching valves) and performing continuous-mode pyrolysis, all pyrolyzates are continuously and directly transferred in a single step process into GC as they are generated. Heavy and polar compounds are directly placed on-column, and light compounds are never lost.

The sample, placed in an inert sample cup, is held in ambient temperature and is not exposed to any heat before the analysis. Therefore, there is no chance of evaporation, degradation, or thermosetting before the analysis. Also, the sample is purged of oxygen before heated so that there are no oxidation reactions.

To learn more about the multi-mode micro-furnace pyrolyzer, its modes of operations, and what sets the technology apart from other pyrolysis devices simply connect with us or visit us at www.frontier-lab.com